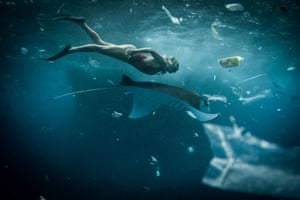 Indonesia has pledged up to $1bn a year to dramatically reduce the amount of plastic and other waste products polluting its waters. The announcement was made by Luhut Binsar Pandjaitan, Indonesia’s coordinating minister for maritime affairs at last week’s 2017 World Oceans Summit in Nusa Dua, Bali.

Pandjaitan told delegates at the conference that Indonesia would achieve a 70% reduction in marine waste within eight years. He proposed developing new industries that use biodegradable materials such as cassava and seaweed to produce plastic alternatives. Other measures could include a nationwide tax on plastic bags as well as a sustained public education campaign.

The World Bank estimates that each of Indonesia’s 250 million inhabitants is responsible for between 0.8 and 1kg of plastic waste per annum. Only China dumps more waste in the ocean, according to a 2015 report in the journal Science.

Plastic pollution is just one of the threats to these ecosystems services, but it’s a serious one. A recent study suggests that by 2050, there could be more plastic than biomass in the world’s oceans. Plastics have entered the marine food chain and are already reaching our dinner plates.

Indonesia’s commitment is part of the UN’s new Clean Seas campaign, which aims to tackle consumer plastics through a range of actions – from cutting down on single use plastics such as shopping bags and coffee cups to pressuring firms to cut down on plastic packaging. Nine countries have already joined Indonesia in signing up to the campaign, including Uruguay, which will impose a tax on single use plastic bags and Costa Rica, which is promising better waste management and education.

But Indonesia’s target of a 70% reduction by 2025 is ambitious. Across the country’s 17,000 islands there is poor public understanding of the problems created by plastic waste.

Companies produce small scale products such as single use shampoo packets and confectionery that are popular in communities where cash flow pressures and habit prevent more sustainable consumption. Add poor waste management infrastructure and the scale of the challenge comes into sharp focus.

During rainy season, thousands of tonnes of rubbish discarded in rivers and waterways washes up on Indonesia’s shores. Heavy machinery is often brought in to clear the tourist beaches of Bali and local communities and non-profits are constantly organising large scale beach clean ups.

Last year, a tax on single use plastic bags was trialed in 23 cities across Indonesia. While the government reported a big reduction in plastic bag use, there was significant resistance both from consumers and industry, according to Siti Nurbaya, Indonesia’s minister for the environment. This is delaying a bill to impose a nationwide tax of not less than Rp.200 (1p) per plastic bag.

Environmentalists will be hoping that the promised funding effectively channels resources and expertise into public awareness and education programmes, improvements in waste management, pressure on industry and initiatives that encourage alternatives to plastic packaging.

The UN campaign reminds us all, however, that plastic pollution is a problems we can all address with some very simple changes in behaviour.

As environmental leaders around the world continue to put the onus of product recycling back on waste generators, Dell Inc., is taking another step along its own path to a circular economy by adding ocean plastics to its packaging.

Last week, Round Rock, Texas-based Dell announced it will keep 16,000 pounds of plastics out of the ocean and in the economy by mixing it in a 1:3 ratio with recycled HDPE plastics to make a new packaging system for its XPS 13 2-in1 laptop. Overall, 25 percent of the recycled content of the trays will be ocean plastics. Dell hopes to increase the amount to 20,000 pounds of ocean plastics next year and continue to look at how the ocean plastics can be used for both packaging and possibly products in the future.

After collaborating with Grenier, who is best known for his role in the HBO series Entourage, and the Lonely Whale Foundation on “Cry Out – The Lonely Whale VR Experience,” a three-minute underwater VR expedition created by 3D Live with Dell Precision, Alienware, AMD and HTC technology. The experience is almost like a ride, where participants get the sensation of diving deep into the sea and are greeted by shoals of fish – but also by carpets of plastic pollution and the damaging noise of seismic probes.

Then, with more research, says Campbell, the company learned the bleak numbers behind ocean plastics. “There’s approximately 8 million tons of plastic waste going into the ocean every year and that number is increasing. If things don’t change by the year 2050 there will be more plastic in the ocean than fish. And that is just staggering,” he says.

Although the perception is a large sea of plastics thick enough to walk upon floating in the ocean somewhere, says Campbell, the reality is that once plastics are in the ocean they break down into smaller and smaller pieces, and the ability to recover them is greatly diminished.

So instead, the company is collecting the plastics at its most concentrated point—just before it goes into the ocean. Dell is focusing on Portau-Prince, Haiti, where research showed a large amount of ocean plastics come from. Additional focus is on Southeast Asia in India, Vietnam, China, Indonesia and the Phillipines, which according to a white paper discussing Dell’s approach, have the highest concentrations of land-based ocean plastics and can be viewed as a supply chain network providing substantial materials on a daily basis. The reason for this, Campbell says, is many of these areas lack a formal waste system for handling garbage and recycling.

So, in Haiti, local pickers collect these land-based ocean plastics from beaches, waterways and coastal areas and take them to collection or recycling centers, where the plastic is aggregated and sorted by the waste processors. They are then processed and refined and sent to China where the packaging trays are made. The trays are molded and stamped with an illustration of whales and the #2 recycling symbol. The trays, are curbside recyclable in many communities the company says, with the hopes that they will stay in the loop of the circular economy.

The company has taken a hard look at its packaging, making it a priority in its Dell Legacy of Good goal of 100 percent sustainable packaging by 2020. Campbell says the quality of the mixed plastics works well for packaging and the cost may even be lower than other packaging.

This is not Dell’s first go at recycling, he adds. The technology company has a 10-year history of innovation in recycling and packaging as well as recycled content, such as water bottles in its computer products.

With the goal of the circular economy being to recycle and reuse materials continually, rather than send them to landfill after a single use, Dell’s packaging innovation has lead it to use various sustainable products including wheat straw, bamboo and mushrooms in addition to the ocean plastics. The company says using recycled content materials from various waste streams helps break free of the linear march of materials to landfills when they reach end of life.

Dell also has lead the tech industry in efforts to recycle computer plastic, as it announced in 2015, it was incorporating 2.89 million pounds of that plastic e-waste into its OptiPlex 3030 All-in-One, OptiPlex 3020 and 13 other desktops and monitors. In that effort, the company collected computer plastics in take-back programs it had set up in 78 countries and then shipped to China, where they were shredded, melted and blended with virgin plastic before being molded into new parts. The recycled plastic content averaged 35 percent.

One of most daunting tasks for MRFs is dealing with blended plastics and with plastics that become contaminated when they mix with other waste. These dirty and blended materials not only are rendered worthless, but ratchet up recyclers’ costs when they have to pay to landfill them.

But an Allenton, Pa., startup, Zzyx Polymers, is deliberately mixing all kinds of waste with plastic as it develops a technology aimed at producing new kinds of recycled plastic. So far the team has done small scale proof of concept trials to show some manufacturers that they can obtain the desired material properties. Zzyzx is starting with plastic films because MRFs receive a lot of this material and it’s tough to recycle.

A key to preserving plastics’ strength is in blending them before they are melted and forming the pellets afterward.

“By blending at room temperature we get things to intimately mix and preserve strength,” says Mike Janse, Zzyzx Polymers CEO.

“We can incorporate challenging materials like PE and PP, which normally don’t blend. Through our process it works, and we end up with good plastic.”

Zzyzx has already created a few unconventional test products, for instance frisbees made from coffee pods and plastic.

But Zzyx is scaling up with a grant from Closed Loop Fund and a National Science Foundation grant to further develop the technology with plans to commercialize it.

Through its proprietary process, called Solid State Shear Pulverization, the company “compatibilizes” materials that would otherwise harm plastic’s strength. Compatibilization is the addition of a substance to a blend of polymers that will increase their stability.

Zzyx achieves this by blending different plastics. The process also allows the firm to toss in cardboard, rice husk and food and label residues.

The Closed Loop Fund believes that the young company is onto something.

“One of the greatest challenges in plastic recycling is making high-value pellets out of food-contaminated or mixed plastics. Zzyzx has developed a cost-effective, low-energy process to do just that,” says Closed Loop Fund Managing Director Rob Kaplan. “We hope this will open the door, making more packaging recyclable and spur additional innovation in this space,”

Zzyzx zeroes in on ocean plastics

“The view is you just scoop it up and send it to a recycler. But much of this plastic is degraded from sun and water,” Janse says. “We can blend ocean plastics with other plastics to make it stronger. We took PP from the ocean and turned it into a pellet. It meets many manufacturers’ specs that we have learned of through MRFs,” says Janse.

Most of the sustainability professionals he has talked to are focused on the question, can this material be recycled?

“Let’s not start with, can it be recycled? We know we can do it,” Janse says. “What we are doing now is trying to identify the end product they will buy and use as a company.”

For now, Zzyzx focuses on what manufacturers use in their operations rather than what they create and sell. Brands worry about the consequences of changing product formulas. So the startup is proposing creating products like shipping pallets, crates and trash cans made for companies from their own waste.

These non-food grade products have less demanding specs and aesthetics are not as important. So while manufacturers may be hesitant to start with, they can get comfortable with this approach. The risk profile works for manufacturers, and the timeline works for Zzyzx.

“As a startup company we can’t hang with someone for three or four years to test the material. This will speed up the process,” says Janse.

As the team moves along, it consults with converters and MRFs to learn of manufacturers’ specifications to be able to produce marketable products that meet their needs.

While Zzyzx is currently focused on ways to use manufactures’ waste, and plans to scale up using this model, the company hopes to eventually capitalize on postconsumer plastics.

“That will increase the amount of recyclable material coming out of MRFs,” says Janse. “We can make progress toward the goal of closing the loop. And we will be helping the environment.”