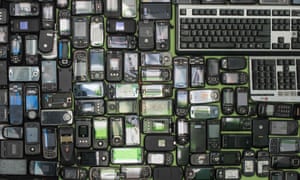 Greenpeace claims Samsung has 4.3m smartphones to dispose of after its Galaxy Note 7 recall. What’s the responsible way to recycle them?

At the smartphone world’s annual shindig in Barcelona, there are some things the tech giants have been trying to get people talking about – the relaunch of the Nokia 3310, BlackBerry’s new fingerprint scanner, Samsung’s virtual reality headset.

But there’s another, less glamorous story that they haven’t been so keen to promote. And that concerns the fate of their gadgets when consumers have finished with them.

On Sunday, Greenpeace interrupted a Samsung press conference to protest the company’s failure to produce a recycling plan for the defective Galaxy Note 7, recalled last year due to fire risk. The campaign group claims Samsung has 4.3m handsets to get rid of.

A Samsung spokesperson has since said the company is working “to ensure a responsible disposal plan” for its defunct phones, and prioritising safety and environment. But if the piled up Galaxy Note 7s go the same way as the rest of our old smartphones, computers and tablets, where might they end up?

Since the start of 2017, we have thrown out more than 6.4m tonnes of electronic goods, according to The World Counts, a website keeping a live tally of global e-waste. If past patterns are any judge, not much of this will get properly recycled: less than a sixth of the e-waste discarded around the world in 2014 was dealt with in this way, says the UN.

Even in developed countries with advanced infrastructure, electronics recycling rates are low. The US recycled just 29% (pdf) of the 3.4m tonnes of e-waste it produced in 2012, according to the Environmental Protection Agency, while the rest was sent to landfill or incinerated.

“Our recycling rates for electronics are abysmal,” says Jim Puckett, executive director and founder of the Basel Action Network (BAN), an NGO. He estimates that 5% of metals used in electronics are recycled, at most.

When products are handed over for recycling, a portion end up in informal recycling hotspots in developing countries, such as Accra in Ghana or parts of southern China, where they are broken down in an uncontrolled environment, Puckett explains. UN figures suggest up to 90% of the world’s e-waste is illegally dumped.

“We sweep everything to developing countries where they have the least infrastructure and efficient recycling,” says Puckett.

In a recent experiment, BAN placed GPS trackers on 205 old printers and monitors to see what happened to them. Of the devices handed over for recycling, 40% were sent offshore, mostly to Asia. BAN’s team followed 37 of them to Hong Kong, where it found workers breaking down electronics by hand in informal junkyards.

This kind of unregulated processing of e-waste carries severe consequences for environment and human health, including air pollution when circuit boards are heated to access the metals, soil pollution as chemicals seep into the earth, and water pollution as toxic materials get into groundwater and other supplies.

Recycling failures also lead to a waste of precious materials, like gold, copper and platinum. This not only means that fresh supplies are mined unnecessarily, but also that money is wasted through missed recycling opportunities. Potential revenues from e-waste recycling in the European market in 2014 were as high as 2bn euros, estimates Sheffield University’s centre for energy, environment and sustainability.

Companies including Microsoft and Dell have sought to address their e-waste footprint by partnering with third-party organisations like Goodwill, which sells or recycles donated electronics. Last year Apple unveiled a recycling robot called Liam, who it says can take apart an iPhone in 11 seconds.

More recent ideas have included a mobile phone offset scheme, launched on Tuesday by recycling company Sims Recycling Solutions and Dutch social enterprise Closing the Loop. They promise to remove one phone from an e-waste dump for every phone used by the scheme’s customers, including ING Bank.

Puckett believes more systemic change is needed, however. When it comes to tackling the sheer quantity of discarded electronics, he says progress will only come via market-based incentives for longer-lasting electronics. A system where electronics are leased out rather than bought and sold, for example, would incentivise companies to make products last as long as possible, he says.