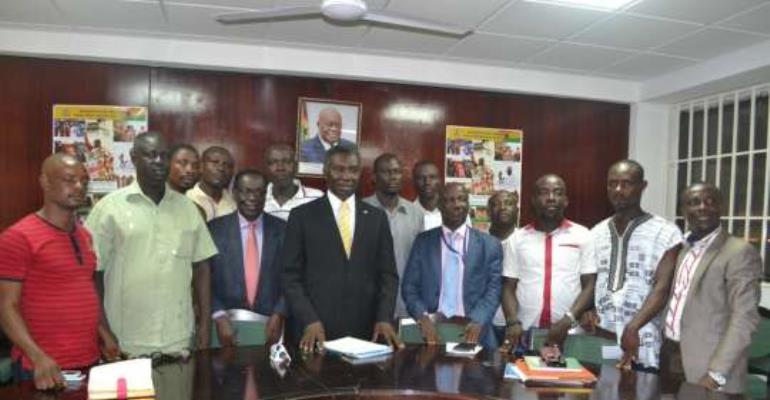 By Lydia Asamoah, GNA
Accra, April 7, GNA – A group of Illegal miners (galamsey operators) from the Western Region have called on Professor Kwabena Frimpong-Boateng, Minister of Environment, Science, Technology and Innovation, to express their readiness to assist government in addressing the menace of galamsey.

The group, who were made up of members from Amanfi East, Amanfi West, Amanfi Central and Prestea Huni- Valley districts, mining operators, was led by Nana Ntori Bonkyi Akomea and Nana Asafotse Badu both from Amanfi East District.

The Group said they were also concerned about the devastation to water bodies and the forest lands as well as appreciated the public outcry over the situation and therefore supported efforts at finding solutions.

Nana Akomea on behalf of the group said they were ready to collaborate with government to regulate activities of small-scale miners and illegal operators and to ensure that they operated within the confines of the law.

He said they supported the idea of a moratorium, a period of time where everybody would be made to lay down their mining tools and to be made part of addressing the menace.

‘We are ready to halt all activities of mining in the communities, to allow all stakeholders to come together to repair the damages by covering abandoned pits left uncovered whilst reclaiming the land through afforestation and tree planting,’ he said.

Nana Akomea suggested that all those who mined in the rivers and along the river banks should be stopped but those who operated on the land within the confines of the law should be supported and their capacities be built to enable them operate in the right way.

‘We all know that gold cannot be left under the ground, it needs to be mined so we are pleading that we should be helped to do it in the right way,’ he said.

Nana Badu on his part called on government to look at the licensing regime in granting mining concession to individuals and organisations and decentralised it at the district levels to ensure that all operators were granted appropriate licenses, and were monitored to see that they operated under the rules of engagements.

He said indeed there were about some four million people in the country who benefited from galamsey operations both directly and indirectly, and that it should not be disregarded at all but that they should be assisted to do the right things in the right ways.

The group also appealed to government to assist them form taskforces to monitor their colleagues in doing the rights things in the mining sector.

Prof Frimpong-Boateng appreciated the efforts by the operators in helping find solutions to the menace, saying, that it was critical to protect and preserve the water bodies and to recover the lands.

He said he would send their concerns and appeals to President Nana Addo Dankwa Akufo-Addo to take a decision on the way forward.

He said the government would also collaborate with the local communities to recover the lands through tree planting exercises after the land had been recovered.