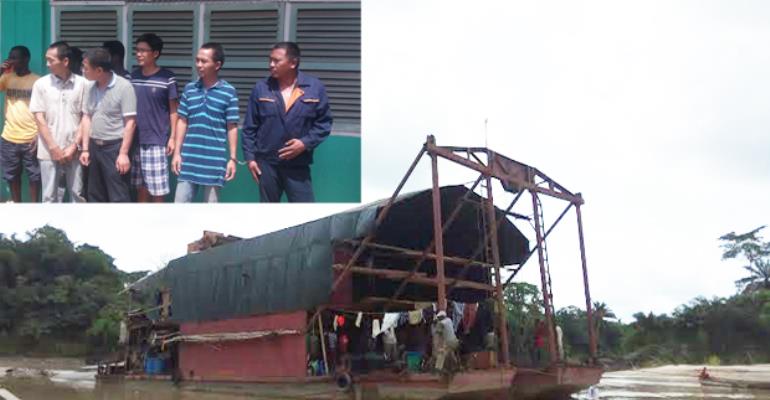 The structure which housed the Chinese on the river. INSET: The suspects

A Sekondi high court has remanded the five Chinese and five Ghanaians who were arrested last Friday by the police in the Western Region for reportedly mining gold in River Ankobra, as their lawyer, Stephen Alawabah, wants them freed.

“I want them to be set free because they are human beings. They have rights and I think once they have been here (court) they need someone to defend them in order to be able to prove the case,” he stressed.

The Chinese and their Ghanaian counterparts were reportedly seen mining in the river in two communities – Bamiankor and Duwale – last week Friday.

The Ghanaians are Eric Owusu, 28; Kwabena Adjei, 50; Nana Adu, 42; Kwasi Owusu, 28 and Kofi Darko, 21. The police were said to have seized mining equipment from the suspects and were put before court yesterday.

Speaking to journalists at the Sekondi magistrate court after brief proceedings, the lawyer for the suspects remarked that the truth of the matter would be uncovered in the course of the trial.

“The onus lies on the prosecution to prove their case better. What the prosecution is saying might not be necessarily the truth and at the end of the trial people will appreciate the fact that may be the police did not do well for bringing up the case.”

When pushed further, he added, “Not necessarily do I want the suspects to be set free. In fact, we want justice to be delivered – the type of justice that everybody will appreciate.”

Drama
Drama unfolded when the ten suspects were initially hauled before a Sekondi magistrate court yesterday.

The expectations of the audience and journalists who trooped to the court premises in their numbers were not met as the proceedings did not last long.

According to the prosecutor, Sgt Francisca Nyarko, the court did not have the jurisdiction to hear the case, considering the nature of the offence and the punishment assigned to it.

She then prayed the court to refer the case to the circuit court in Takoradi.

The magistrate, Susana Eduful, then discharged the suspects but they were rearrested and sent to the circuit court for hearing.

Immediately the judge made the pronouncement, the journalists and some of the residents who were in the court room quickly moved out and joined available vehicles straight to the Takoradi circuit court.

However, to the disappointment of the numerous journalists, they realized that the circuit court did not sit when the suspects were brought to the court premises.

The suspects then had to be taken back to Sekondi and this time, to the high court.

The suspects were put before a Sekondi high court presided over by Justice Edward Amoako Asante.

Their pleas were taken and the court remanded them into police custody to reappear before it on Monday, April 10, 2017.

That was after a state prosecutor, George Sackey, had prayed the court to give the prosecution some time to further investigate the case.

“We want to find out whether they (suspects) are conducting their mining activities with licence from the relevant authorities and so the police should be given adequate time to investigate,” he told journalists.

He continued, “If the suspects are granted bail, they are likely to interfere with witnesses desiring to testify in the case.”

Counsel for the suspects told the court that his clients were entitled to bail, looking at the offences preferred against them.

The court however, refused to grant the alleged galamsey operators the bail and remanded them.

Water Bed
The Chinese were arrested in the well-built ‘water-homes’ on River Ankobra covered with tents and mosquito nettings. They had also built a toilet on the river, surrounded by their mining equipment.