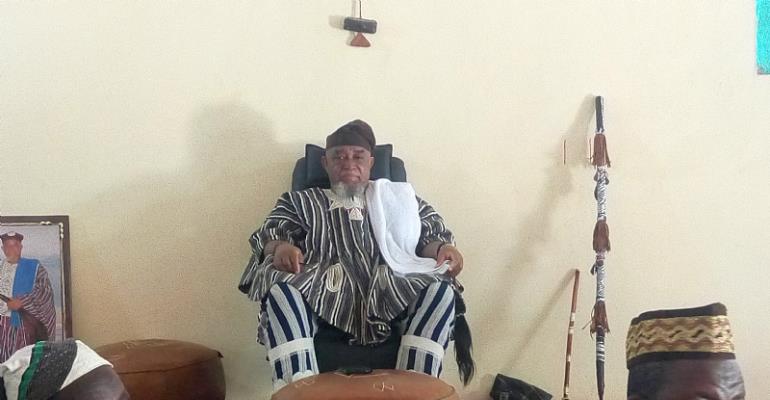 The Paramount Chief of the Talensi Traditional Area, Tongoraan Kugbilsong Nanlebegtang, has suspended all forms of mining both licensed and unlicensed from operating in the Talensi traditional area with immediate effect until further notice.

He has also cautioned all chiefs and landowners(Tindaanas) within the traditional area, not to lease out lands for any mining activity without the approval of the Talensi traditional council.

This decision according to Tongoraa, is to allow for comprehensive investigations into all mining activities in Gbane in order to curb the precarious mining practices that have led to the loss of lives and environmental degradation.

“We the Talensi traditional council have extended the temporary ban beyond the Shaanxi Ghana Mining company limited to cover all licensed and illegal miners in Gbane. We are doing it through the Minister of Lands and Natural Resources John Peter Amemu, the Minerals Commission and the Upper East Regional Police command…”

Addressing a press conference at his palace in Tongo, Tongoraan Kulgbilsong Nanlebegtang said the perilous nature of mining in the area has not only polluted water bodies and destroyed farm lands, but the use of mercury and cyanide by the miners also has a serious effect on humans and the soil water.

“The top soil of farms in the area have been destroyed by graders and bulldozers. There is so much degradation of the land and water such that if it is not stopped now, future generations will curse us for not catering for them.”

The Tongraan blamed the Minerals Commission and the Environmental Protection Agency for failing the fight against Galamsey in the area.

“The Minerals Commission and the Environmental Protection Agency have not been able to effectively play their roles as regulators and policing agencies collectively to curb Galamsey destruction of farm lands and water bodies within the mining areas,” he said.

The Minerals Commission has approved over 30 small scale miners in the Talensi traditional area.

“The situation has led to an increase in land boundary disputes and the incessant deaths of over 100 young people through collapsed pits and explosive toxic chemicals since 2006,” the Tongraan stated.

Tongraan Kugbilsong Nanlebetang also disclosed that, the Minerals Commission has never involved the Talensi traditional council before issuing permits or licenses to mining companies operating in the area.

This comes after the government temporarily suspended the operations of Shaanxi Ghana Mining Company Limited operating at Gbane in the Talensi District of the Upper East Region.

According to a letter signed by the Minister for Lands and Natural Resources, John Peter Amewu, the suspension is to allow for thorough investigations into the company’s underground operations, and the alleged death of about seven miners in the area.